What is it about orchids?

I’ve begun to ask myself why I  announced  I’d do a post about a few orchids I’d seen recently. Why should that be special? Would I do the same for a few thistles?

I suppose what might make orchids appealing could be their rarity value – though some are locally common. Or it could be their colour – many are vividly pigmented, as are many other plants which also have bulbs or tubers: dahlias, irises, tulips and so on.  I think there’s a clue there, in the underground storage reserves which bulbs or tubers represent.

Usually, spring here is short: March and April are the months when it’s warming but not baking, and it’s the season with the most rain.  If you’re a plant, you’ve got eight weeks to get your flower out, get pollinated and set your seed. Plants which have a bulb, corm, rhizome, tuber etc (called geophytes because a significant part of their yearly cycle is spent in the earth) have an edge here over seeds which have to germinate and then generate energy from photosynthesis. A bulb or tuber can get a big showy flower out and attracting insects before your average weeds have woken up.  It’s a bit like a desperate annual village dance: the singles have a very short time to attach, match and hatch, and those with a stored sexy wardrobe are out in front (double entendre intended).

Then the bulbs and tubers have another function: to enable such plants to survive a harsh season, and here in the Midi that usually means the long hot dry summer (which still hasn’t started yet, by the way, and we’re all getting pretty impatient).

So the vivid colours and fascinating shapes of orchids are all about sex – they’re going to flaunt themselves for all they’re worth to get their pollinator while they can, and many have ‘chosen’ the high-risk strategy of focusing on a single pollinating insect – the  ‘I’m gonna get Derek and I don’t care what it takes’ option. Since the combination of sex and gambling seems to power most of the internet (at least its spam content), why should I be surprised that it interests botanists.

So here are a few examples spotted at the Botany Hop, disporting themselves like stars on the Cannes red carpet.

This is Orchis mascula, the male, or early purple, orchid. I imagine that it gets its male name from the long upcurved spur, which looks, well, interested, if not to say priapic.  Or have I just got a mild dose of orchidelirium coming on? 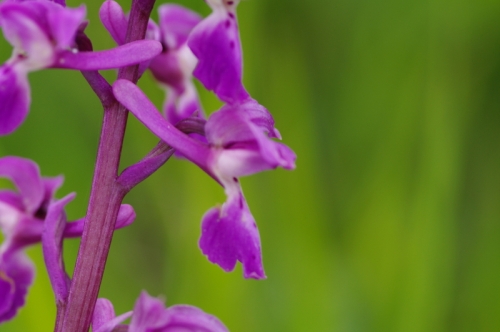 This flower was spotted in the Loire region a few weeks ago, and we saw many by the roadside driving back home – until we got home. It doesn’t seem to get on too well with the Mediterranean climate, and may only be found in the mountains here. I haven’t seen it near my village.

Now a couple of species from the genus Ophrys which have really adapted to specific insects by evolving the lowest petal into a large patterned lip.  To quote my flora:

The insect-like nature of the lip attracts males of particular insect species, stimulating them into pseudo-copulation during which they pick up pollen.

I was thrilled to find a whole colony  of Ophrys lutea – Yellow Ophrys – a couple of weeks ago. This flower has evolved to attract a single genus of bee: Andrena. Apparently this flower is unusual in that the bee poses backwards, i.e. abdomen towards the plant, to pick up pollen during  its ‘pseudocopulation’. Interesting. 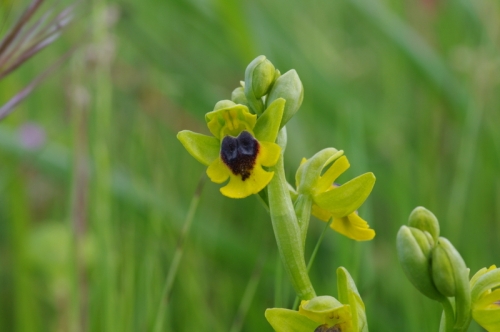 And here’s another species, Ophrys scolopax – the Woodcock Orchid. 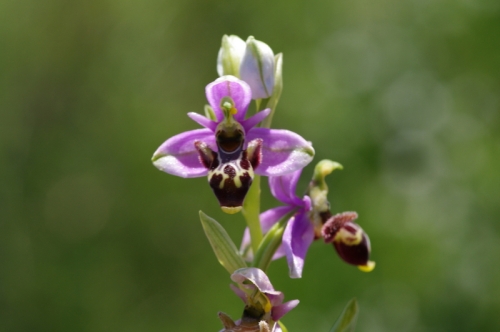 ..and now one from the side’

No, this isn’t pollinated by woodcock, but the pattern on the lip looks a bit like that on the head of the bird.  Judge for yourself.

Woodcock – thanks to wikipedia

I photographed this only a few days ago on the sauveplaine near the village. I can’t wait – but I will – to show you this astounding habitat, which just took my breath away.  More in the next post.

Now the themes of exuberant showing off and dancing made me think of Count Basie: here’s a great film clip from 1943 of his ‘One o’clock jump’.

5 responses to “What is it about orchids?”