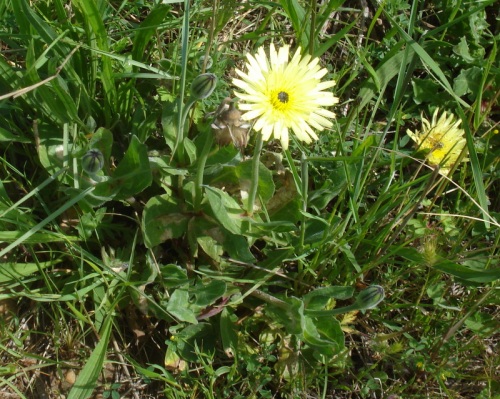 This looks like a big dandelion, but it is a lovely lemon-yellow, often with a black centre, and I like it because it brightens up the roadside verges – and because of its historical connections. It’s a member of the Compositae family, which means that the flower head is made up of many ray-florets, tiny flowers with a long strap-like ray at one side. The centre is often black, and the outer florets often reddish-brown on their underneath edges.

A Mediterranean perennial plant, not found to the north of the Ardèche. 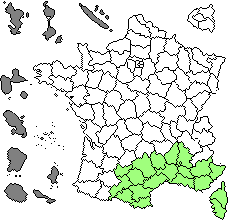 The young leaves can be used raw in salads: like dandelion they are quite bitter but a few will jazz up a bland lettuce, or you could follow Jane Grigson’s advice for dandelion leaves and add diced bacon, croutons, and chopped boiled egg.

So, to the history. It’s in the name: Urospermum is from the shape of the seed, but dalechampii is because it was described by the botanist and doctor Jacques Dalechamps (1513-1588) in his Historia generalis plantarum in 1586, 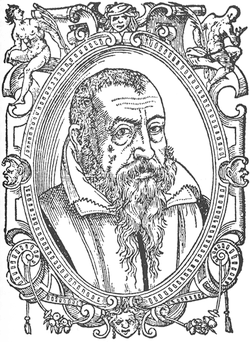 which described 2,731 plants, the greatest number of any book then available.  Dalechamps was then practising medicine in Lyon, but had studied at the University ofMontpellier, just 16 years after Nostradamus (Michel de Notredame, 1503-1566) was expelled from there for having been an apothecary, by the very man who was later to become Dalechamps’s teacher: Guillaume Rondelet.  By that time Montpellier had already been a centre for herbal and then medical training for about 500 years: the school became a University in 1289, only  32 years after the Sorbonne.  I’ll be coming back to this topic because of the large number of plants first described byMontpellier graduates.

For the music link, back to the colour – it’s the Neville Brothers’ Yellow moon from the 1989 album of the same name. For K, and I hope this brings back some memories of New Orleans.