The she-devil who helps you breathe: Sacred thornapple ( Datura wrightii)

This plant has a long story to tell, connecting Culpeper, Linnaeus, Charles Darwin and Carlos Castaneda, via shamans, drug users and asthmatics. Its powerful presence in the history of botany and herbalism is due to the tropane alkaloids it contains: atropine, hyoscyamine and scopolamine, which inhibit certain nerve pathways.
Datura belongs to the plant family Solanaceae, together with deadly nightshade, another potent source of atropine. But also in this family are cultivated fruits such as aubergine, peppers and tomatoes, and potatoes. I do wonder how these were first cultivated, and how many casualties there were from the first breeding experiments – we know that unripe fruits of these, and green potatoes, can still cause illness.
This particular plant has been growing for a few years in the middle of some waste ground in my village. I’ve also seen it on the river bank nearby, and planted in public flower beds, but the waste ground specimen is the largest and, I presume, oldest. 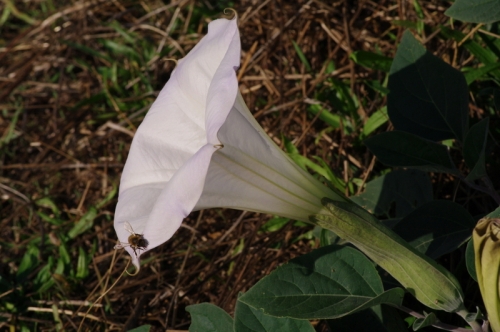 At first I thought it was Datura stramonium (Thornapple), but the latter has green stems, more jagged leaves, smaller flowers and upright fruits , while D. wrightii has purplish stems, wavy-edged dark leaves, large flowers and hanging fruits. All species of Datura – there are nine – are very variable, especially in size, depending on location. The name thornapple of course comes from the large spiny fruit capsules.

Both are introduced species, probably for decoration in gardens, but have spread and naturalised locally in southern France, Spain, and round the Mediterranean generally.
D. stramonium was the first species to be scientifically described and named Datura, from the Hindi word dhatura for the plant, by Linnaeus in 1753, though it had already been described as thornapple by Nicholas Culpeper a century before. It’s thought that the genus originated in what is now the south-west United States and Mexico, where the greatest species diversity exists, but very soon it must have arrived in India, where it has a long history in Ayurvedic medicine. Why the asthma connection? Apparently the flowers can be rolled up and smoked like a cigarette to relieve symptoms of asthma – the alkaloids inhibit the muscles in the airway walls, and so enlarge the bronchioles, making it easier to breathe. Due to other effects (see below) I would not recommend this.
Datura species have many other names, including moonflowers (because the flowers open in the evening, and are often pollinated by moths), Devil’s trumpet or Devil’s weed (from the delirium it produces), and jimsonweed. This is thought to be a corruption of ‘Jamestown weed’, after an incident in Jamestown, Virginia when the leaves were:

gather’d very young for a boil’d salad, by some of the soldiers sent thither to quell the rebellion of Bacon (1676); and some of them ate plentifully of it, the effect of which was a very pleasant comedy, for they turned natural fools upon it for several days: one would blow up a feather in the air; another would dart straws at it with much fury; and another, stark naked, was sitting up in a corner like a monkey, grinning and making mows [grimaces] at them; a fourth would fondly kiss and paw his companions, and sneer in their faces with a countenance more antic than any in a Dutch droll.
The effects lasted for eleven days. (from The History and Present State of Virginia, 1705, via wikipedia).

Datura wrightii was named in 1859 by the botanist Eduard Regel for the American plant collector Charles Wright (1811-85), who had found it in Texas in the 1850s. Wright did a lot of collecting for Asa Gray, Professor of Natural History at Harvard. Although he was a member of the First Church in Cambridge, Gray was a stalwart supporter of Charles Darwin and tried to reconcile theism with evolution. In view of the early world-wide spread of Datura, it’s interesting that Gray’s knowledge of American flora helped Darwin establish that fruits and seeds could cross the Atlantic.
Stanley Welsh, author of A Utah Flora, has this to say about Datura wrightii: “The flowers are the largest of any native plant in Utah, and are sweetly scented. The herbage smells like a wet dog”. Lovely.
So let’s get on to the sacred aspect, which is connected to the toxic qualities. All parts of the plant contain the alkaloids which cause delirium, delusion, fast heartbeat and a rise in body temperature, followed often by amnesia. This is serious enough to be fatal in a large number of cases. The plants are especially dangerous because the concentration of alkaloids, and their relative proportions, can vary greatly, so users never know what dose they are taking.
The delirium effect has long been used as a way to experience ‘other realities’, especially in India and by Native American tribes:

To the Chumash, D. wrightii has a female spirit, and certain shamans may specialize in the use of this plant, which communicates with them through prophetic dreams… [It] is most important . . . as part of initiatory rituals for boys. To prepare for the ritual, the initiate fasts and eats no meat for several days. He smokes a great quantity of tobacco during this time. The boy then consumes the D. wrightii beverage, which is traditionally prepared by his grandmother. He is left alone in a cave, where he must give in to the power of the plant and allow it to show him visions. At this time, the Datura spirit teaches the boy anything he might want to know, and often assists him in finding an animal spirit ally. The period of intoxication lasts for 24 hours, after which time a Datura shaman assists the initiate in constructing a life plan based on the visions he has experienced .(www.entheology.com)

But perhaps the best known use is recorded in a book once found on many young people’s shelves, including mine. In THE TEACHINGS OF DON JUAN: A Yaqui Way of Knowledge, in a segment dated Saturday, July 6, 1963 Carlos Castaneda writes:

On Monday, July 1, I cut the Datura plants don Juan had asked for. I waited until it was fairly dark to do the dancing around the plants because I did not want anybody to see me. I felt quite apprehensive. I was sure someone was going to witness my strange acts. I had previously chosen the plants I thought were a male and a female. I had to cut off sixteen inches of the root of each one, and digging to that depth with a wooden stick was not an easy task. It took me hours. I had to finish the job in complete darkness, and when I was ready to cut them I had to use a flashlight. My original apprehension that somebody would watch me was minimal compared with the fear that someone would spot the light in the bushes.
I took the plants to don Juan’s house on Tuesday, July 2. He opened the bundles and examined the pieces. He said he still had to give me the seeds of his plants. He pushed a mortar in front of me. He took a glass jar and emptied its contents — dried seeds lumped together — into the mortar.

On July 4, 1963 Castaneda applied the ointment he and Don Juan concocted over a period of days. Following that application Castaneda relates that he turned into a crow with the full ability to fly.
As with all Castaneda’s writings, you can believe what he says or not. I can only tell you that we have many Datura plants in my village, but very few crows. The young people here prefer the reliable results of Red Bull and Heineken.

You may have been afraid that after all the above,I was going to play you Cliff Richard’s Devil Woman. It’s OK, I wouldn’t be that cruel. Here’s something which should have become a jazz standard, instead of a very good pop song, which describes Castaneda’s evening antics.