Two words you might have used, once upon a time, to catch someone’s attention, to show surprise, to have fun. All of which seem appropriate for a new discovery for me on the sauveplaine, the plateau near my village which is so rich in plant life. Yes, it’s another orchid: the Man Orchid (Orchis anthropophora – it also used to be named Aceras anthropophorum), which was growing in a little colony up there. 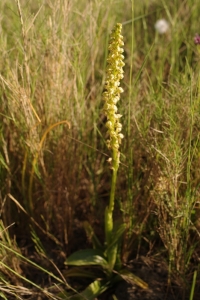 Only about 25 cm tall, with sepals and petals seeming to form a hood or helmet, and the lip resembling a tiny man.

I’ve been keeping a list of the species I’ve found on the sauveplaine, and now I’m up to 92 – when I have a mo, I’ll put the list on the ‘Patch Lists’ page of the blog. I find that keeping a list is a great way to remember names, to appreciate the differences in habitat, and to develop the habit of looking closely at all species, not just the showy ones.

And musos may already have guessed: here’s Bo Diddley from 1959 with the eponymous song.