A curious plant because it is virtually leafless (Aphyllanthes means a plant without leaves)– the leaves are reduced to brown scales wrapping the base of the stems, presumably a chance mutation which gave an advantage in reducing water loss from leaf surface area.  Maybe a relatively recent evolution: this is a genus with only one species – there are no close relatives. 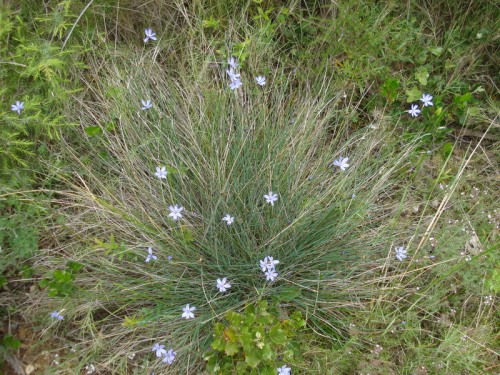 The stems grow in tufts from a mass of swollen fibrous roots, which are sometimes fed to sheep and goats and are supposed to give a fine taste to the resulting cheese – certainly the goat’s cheeses we buy from the farm in the hills where this plant grows abundantly are the best we’ve tasted inFrance.

In French, Aphyllanthe de Montpellier. In Occitan lo blavet (little blue), lo bragalon (little trousers – from the stems?), la dragona (from word for a drumstick or sword?). There is no equivalent English name, since this is a plant of the Midi – see the tela botanica map (green = present). 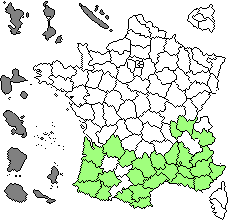 Now the story I want to tell about this plant is a long one with several digressions – you may want to skip to the end and some  of my favourite jazz , but you’d miss the history of a long friendship, more on the central role of Montpellier in botany, and my republican canard  in response to the British royal jubilee excess: the story of a kinky monarch and an assassination.

First, the friendship: Aphyllanthes monspeliensis was first described by two botanists, Pierre Pena and Mathias de Lobel in their Stirpium Adversaria Nova, published in London in 1571.  This was a pioneering work which described 1,500 species with great precision and full details of the locations where each plant had been found – a real advance at the time, and one of the foundations of scientific botany. Because both men had studied medicine in Montpellier and collected plants near there and in Provence this book also gave the largest place to the Midi of any 16th century botanical text.

Mathias de Lobel (1538-1616) was Flemish, born in Lille, and met Pierre Pena when both enrolled as medical students under Guillaume Rondelet in the University of Montpellier in spring 1565.  I can’t give Pena’s dates because, as one French source says,  ‘A strange mystery covers the destiny of Pierre Pena’. It is known however that he was born in Jonques, near Aix en Provence.  His brother, a mathematician and secret  astrologer, advised him from his star charts to give up a career in the army to study, and Pierre went to Parisand then began plant-collecting trips. It is possible that he first met  Lobel on one such trip to Italy– both were in Venice at the same time.  Pena had visited Padua, an old University town with the earliest Botanical Garden in Europe (1525), rival to Pisa, whose Garden was founded in 1544 (that of Montpellier would not be established until 1597 – still a year ahead of that at Paris).

Anyway, after qualifying in medicine at Montpellier, Pena and Lobel seem to have travelled and worked together closely for some years. Certainly around 1570 both were in England, practising medicine and visiting prominent British botanists such as William Turner (who produced the first English Flora), Dr Thomas Penny, and the pharmacist Hugh Morgan (I’m sure I’ll return to this Welsh connection). It was in London that they finished the first edition of  Stirpium Adversaria Nova, which had an unusual dual dedication: to Queeen Elizabeth I, and to the professors at Montpellier. Pena is mentioned on the title page, but not in the text, and Lobel published other works alone.  So why did they part, and  what became of Pena?  Here is a mystery – many sources say he returned to Provence to practice medicine – he published nothing more. But one source offers a solution: he may have become the secret doctor to the French King, Henri III, and this also explains why Pena died a rich man. Henri III, who came to the throne in 1574, was unpopular and was, as described by André Maurois

‘strange and disturbing….tall, thin fastidious, gracious … he showed intelligence but inspired no respect; his effeminate manners, his bracelets and necklaces, his liking for perfumes upset people, as did even more his suspect ‘little darlings’, gentlemen who were altogether too bedecked and beruffed.  When it was learned that he dressed himself as a woman for certain Court festivities, he began to be called ‘Prince of Sodom’.

Clearly there was even more soap opera material there than there is for the Germano-Greek lot in Britain. In 1589 Henri was stabbed to death with a poignard by Jaques Clement, a Dominican friar and a fanatical Catholic (he had first checked with theologians that regicide was OK if it was for religious reasons). I suppose that in the Darwinian struggle for existence till now there must have been more ridiculous royals than dangerous Dominicans – the first breeds more than the second, I guess.  One also presumes that after this drama Pena then went back to the safety of Provence.

Just two more botanical tidbits: firstly to clarify that though they described Aphyllanthes precisely, Pena and Lobel put it in the genus Caryophyllus, and it was the botanist Joseph Pitton de Tournefort who established the genus Aphyllanthes, and credited his predecessors by using the species name monspeliensis (‘from Montpellier’).

Secondly, both Lobel and Pena had plants named after them.  Lobel obviously, in Lobelia, seen in many a hanging basket. Pena was commemorated by the botanist Charles Plumier in the genus Penoea, which I think is an American shrub. Lobel, incidentally, often spelt his name L’aubel – a northern French name for a poplar tree, and the frontispieces of his books featured a nubile young woman embracing two poplars.  One can only guess what the English botanist Joseph Hooker might have designed for himself.

Thanks for getting this far. The jazz is well-known but still a favourite, and a tune to play to close your eyes and escape far from monarchist pomp: it’s Miles Davis and Bill Evans and a title that always comes to mind when I see a clump of Aphyllanthes: it’s Blue in Green, from Kind of Blue (1959).