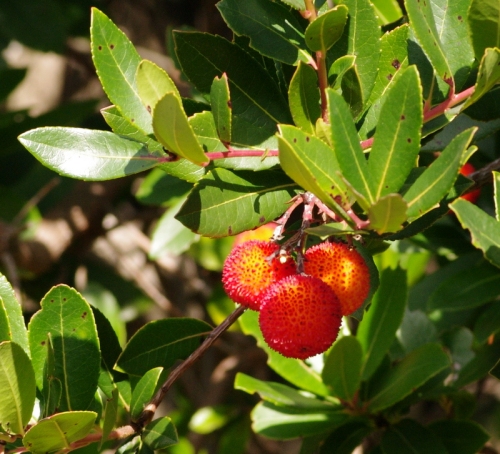 What am I thinking of, imagining anyone is interested in botany when there’s food to be eaten and family to see and midwinter fun to be had?  But anyway….

I prefer seeing this tree, growing wild near here, to an imported spruce with plastic stuff hanging on it. We did pick some branches of Arbutus one year to put in the house – but the berries fell off and made a squishy mess, so now I’ll leave it growing where it is.

It’s curious for several reasons: for example, it’s unusual in bearing flowers and ripe fruits at the same time.  It’s a member of the heather family (Ericaceae – the flowers are very similar), though it’s much bigger – up to 5 metres tall. Finally, though the fruits look as delicious as strawberries – it’s also called the strawberry tree – they taste quite bland. People do use them to make a jelly, but you have to strain out all the hard little pips. 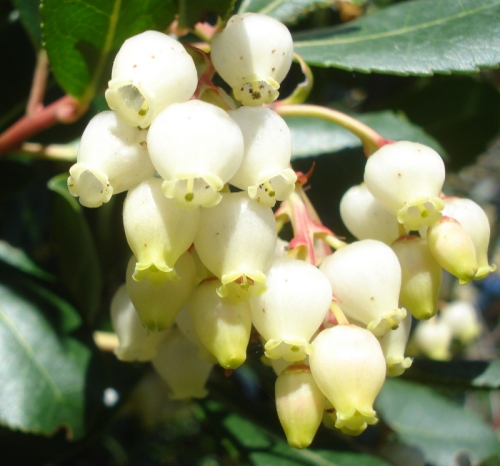 Like other heathers, it doesn’t like soils with a lot of limestone, so it’s found on sandy soil, or as here on a slope of schist – broken sedimentary rock – which is usually quite acidic. For me, this sort of geology is also behind – or rather, under – some of my favourite wines: the northern parts of the apellations of Faugères, St Chinian and Minervois (La Livinière). You can find more explanation here, but it’s to do with the high mineral content of schist, and how the fast-draining soil, which is mostly flakes of rock, makes the vine roots go deeper in search of water.

I can wish you nothing better than to have a glass of any of the above during your midwinter feast, and many more in 2013.