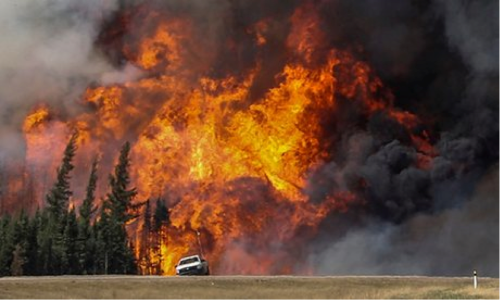 2016 – the hottest year ever recorded

No, not Brave. The Inauguration tomorrow of Donald Trump is not only a political event but a sign of a shift in power towards the forces which exploit our environment, damage our climate, and wreak havoc on the natural world which I try to celebrate in this blog. Cowardly, yes, because almost everywhere politicians are coming forward who kowtow to the rich lobbyists, to the profit-hungry multinationals and to the tiny percentage of people who hold most of the world’s wealth. See the extract from George Monbiot’s article below.

It’s not easy being green these days. To defend a few flowers you have to take on leaders of major powers (even if elected by a minority), colossal companies, and media which are best uncritical, at worst blinded by misinformation. 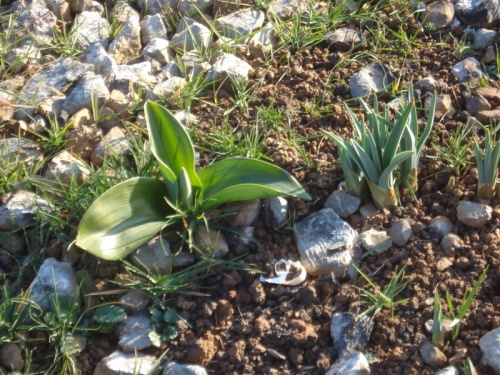 An orchid and some asphodels brave the climate

We have to take heart where we can. So here’s a picture of a corner of the area called Sauveplaine near where I live. It was desiccated by months of drought this year. Then blasted by a pitiless wild fire which killed all the animals and cost the life of a firefighter. Today the night-time temperature was around -6°C, and near zero when I took the photo. But despite these conditions here come the orchid Himantoglossum robertianum and the asphodel Asphodelus aestivus, arriving for their rendezvous with the Spring as they do every year.

Plants are good at surviving natural catastophes – they carried on almost unchanged during the great evolutionary extinction events such as that which wiped out the dinosaurs. Maybe now is a period when we should try to learn from them.

Forgive me the indulgence with which I reproduce something I wrote a little while ago, inspired by a tree I saw – or perhaps met might be a better word. Bon courage to all of you in this new landscape.

The weather is bad almost everywhere
threatening us all, along with everything we love.
I head out into it, steeling myself
and encounter this young ash tree
growing in a rock-filled roadside gully.
Its straight trunk slipping between stones
has resisted winter torrents, letting them flow around it,
its grey skin has known frost and scorching sun;
this tree is staking its place, occupying its ground,
its roots push a few more inches of foothold each year,
it’s staying there, growing tall,
just doing its ash-y thing.

And if some idiot
representing a minority
high on power and hardware
went so far as to cut it down
– or burn it, he doesn’t care –
what then?

The ash has thought of that.
After all, its family has been around
for over a hundred million years.
It has made thousands of seeds
spread them around, seen them germinate.
The ash family will have the last laugh.

To endure this bad weather :
grow a thick skin
let events flow around you
be rooted
take your space
pass on your wisdom
and above all,
stay true to yourself.

By appointing Rex Tillerson, chief executive of the oil company ExxonMobil, as secretary of state, Trump not only assures the fossil economy that it sits next to his heart, he also provides comfort to another supporter: Vladimir Putin. It was Tillerson who brokered the $500bn (£407bn) deal between Exxon and the state-owned Russian company Rosneft to exploit oil reserves in the Arctic. As a result he was presented with the Russian Order of Friendship by Putin.
The deal was stopped under the sanctions the US imposed after Russia invaded Ukraine. The probability of these sanctions in their current form surviving a Trump government is, to the nearest decimal place, a snowball’s chance in hell. If Russia did interfere in the US election, it will be handsomely rewarded when the deal goes ahead.
Trump’s nominations for energy secretary and interior secretary are both climate change deniers, who – quite coincidentally – have a long history of sponsorship by the fossil fuel industry. His proposed attorney general, Senator Jeff Sessions, allegedly failed to disclose in his declaration of interests that he leases land to an oil company.
The man nominated to run the Environmental Protection Agency (EPA), Scott Pruitt, has spent much of his working life campaigning against … the Environmental Protection Agency. As the attorney general in Oklahoma, he launched 14 lawsuits against the EPA, seeking, among other aims, to strike down its Clean Power Plan, its limits on the mercury and other heavy metals released by coal plants and its protection of drinking water supplies and wildlife. Thirteen of these suits were said to include as co-parties companies that had contributed to his campaign funds or to political campaign committees affiliated to him.
Trump’s appointments reflect what I call the Pollution Paradox. The more polluting a company is, the more money it must spend on politics to ensure it is not regulated out of existence. Campaign finance therefore comes to be dominated by dirty companies, ensuring that they wield the greatest influence, crowding out their cleaner rivals. Trump’s cabinet is stuffed with people who owe their political careers to filth.

Here’s a song about a butterfly, cherry blossom, and hope. 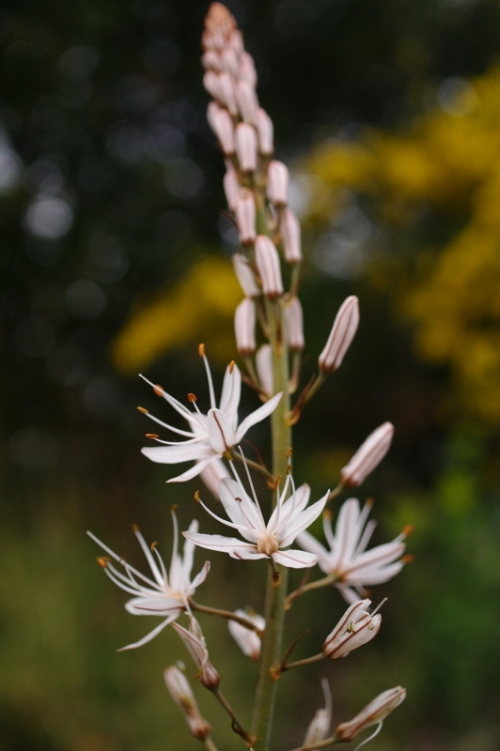 How do plants come to have such meaning for us? I am still under the influence of these flowers which I saw some weeks ago (and were photographed by Chaiselongue), and I’m still stirred and moved.  Is this where the French Presidential election excitement comes in?  No, that connection will be later on.  It is just that these flowers have such . . . presence. They are members of the Liliaceae family, and therefore among the ‘lilies of the field’ which exceeded Solomon’s glory. 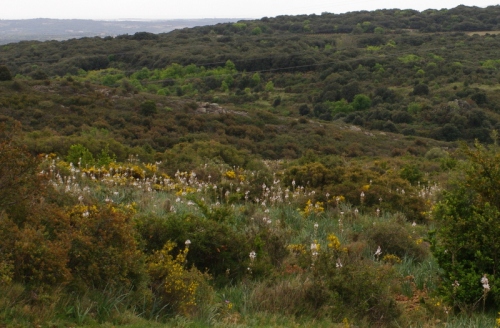 Perhaps  the late spring here after a bitterly cold February has meant that plants grow or geminate late and have benefitted from more daylight and warmth than usual.  Certainly the flower displays seem more stunning and numerous this year, and none more spectacular than the asphodels which appeared in wide drifts on the hillsides rather than small groups.  It’s a plant of high, dry ground, often where it is grazed or trampled, because it’s not eaten by beasts and its basal rosette of tough leaves resists feet and even tyres. They are sustained by underground tuberous roots, which can be eaten, though they have also been used to make glue, so my taste buds are not thrilling at the thought. On a trip south to Pyrenées-Orientales we saw only the shorter A. fistulosus, which we rarely see here – I don’t know why.

But back to the majesty of these metre-tall flower spikes, which seem to say ‘We were here before you. We observe you. We will be here when you have gone’.  They have always seemed to me like white ghosts.  They bring you up short.  They make you think.

So it was no surprise that Geoffrey Grigson* should write that they are ‘the flower of the Elysian Fields, the “asphodel meadow” inhabited by the souls of the dead, according to Homer’.  More prosaically he tells us that Tudor botanists used the name ‘affodil’ – from which the more common daffodil gets its name.

Here we go back more than 3, 000 years, because the idea of Elysium, an ‘Island of the Blessed’ for dead heroes in the afterlife, is a relic of Minoan, pre-Greek civilsation.  The Isles were located in the far west – i.e. beyond the then known world, but were gradually assimilated into the idea of the Underworld (Hades )– a drearier place for ordinary folk who were waiting for reincarnation.  Homer is supposed to have written the Odyssey in the 8th centuryBCE, and describes Elysium like this:

Men lead there an easier life than any where else in the world, for in Elysium there falls not rain, nor hail, nor snow, but Oceanus breathes ever with a West wind that sings softly from the sea, and gives fresh life to all men….”

How do the asphodels grow without rain?  Anyway, in the Odyssey, Odysseus is sent by Circe to the far west, to Oceanus  (the Atlantic beyond Gibraltar?) to bring back a prophecy.  Landing on the island, he digs a hole a cubit square, and surrounds it with a libation of honey, sweet wine, water and barley-meal before sacrificing sheep into the pit.  Sitting beside this portal to the Underworld he is beset by many hungry souls of the dead.  Among them is ‘swift-footed’ Achilles,  his comrade from the Trojan campaign, recently killed by Paris.  After a conversation, Achilles departs ‘with long strides across the field of asphodel’,  his heel evidently much recovered.** 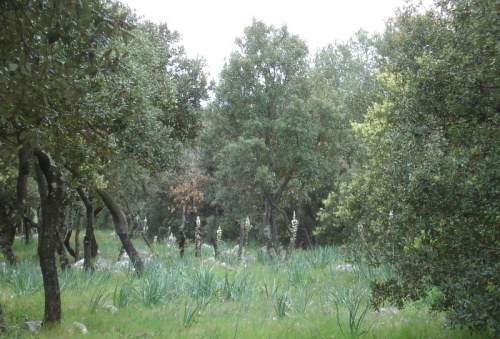 Virgil’s Aeneid also uses the setting of the Elysian fields, now relocated patriotically to Italy and set in Hades rather like a bit of parkland is set in the centre of a  city.  He says of the ‘happy souls’:  ‘In groves we live, and lie on mossy beds’.

In Book VI  Aeneas descends to the Underworld and meets his dead father, Anchises, who shows him visions of a glorious Roman future by calling up souls of great people-to-be.  These days, if you look for the Elysian Fields, say on a French search engine, you’ll get this vision, which I’d call infernal.

So, we’re now in Paris and today François Hollande moves into the Elysée Palace, formal home of the President of France, backing on to the Champs Elysées (Elysian Fields), but before time has yet established whether he is going to be a hero or not. The palace, incidentally,  was  given its name by a pre-revolutionary aristocrat, the Duchess of Bourbon, who bought it in 1787 for 1,300,000 livres.  She didn’t have long to enjoy it.

I don’t envy this new Elysian  either– I’d rather have a patch of garrigue any day.

What music can be a reminder of Greece  (a big issue for Hollande), of its long history, of the illustrious dead? The Charles Lloyd Quartet,  their Athens Concert with Maria Farantouri in 2010, and the song ‘Requiem’, by Agathi Dimitrouka, a song as dignified as the flowers.

to bloom and be resurrected

in light and love.

And to finish with the austerity pact too, I should imagine.

**Homer, The Odyssey book XI, The land of the dead