A dockside community: natives and voyagers 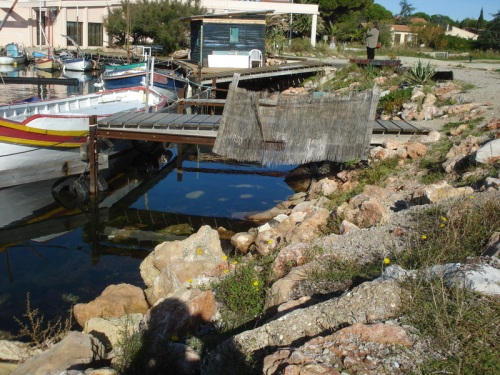 Another day spent at the sea, another unexpected discovery: this time of a small area by the port of Bouzigues, on the Étang de Thau – some 40 minutes from home. We’d been to the Musée de l’Étang de Thau (in the top left of the photo) and were wandering around the port de pêche looking at the old boats when I noticed how many colonies of marine plants had been established on the inner wall of the breakwater.  They were too many and too varied for all of them to have come by chance: someone had collected, planted and looked after them.  It’s not in the tourist literature, there’s no sign; it seemed just a random act of conservation, heartwarming and encouraging.  At home and a couple of emails later,  I found out who makes this effort: it’s the Association voile latine, the group who maintain and use the traditional flat-bottomed sailing boats in the port.  For more about these boats and the setting, see the blog Olives and Artichokes here – the author, Chaiselongue, is in the photo above.

Of course, not everything was in flower in mid-November, though the microclimate of the Étang and the hardiness of maritime plants means that perhaps there were more flowers there than inland. I’m sure I missed many plants which had died back or were present only as leaves, but here are some of the ones I identified.

The white and pink umbels of Crithmum maritimum, or Rock Samphire. In French it’s known as Perce-pierre  because its tough roots get between the rocks. The leaves have characteristic fleshy lobes, and can apparently be preserved in vinegar and used like gherkins. There’s a fascinating full blog post about this plant, with a recipe for the leaves, here.

Note for botanists: the word ‘umbel’ is OK these days as a description of florets like these, borne on many rays radiating from a single point of a stem, like an umbrella, but the term I learnt long ago for the family of these plants – Umbelliferae – is not OK, having been superseded by the new name Apiaceae.

These spikes of florets look like plantains – and they are: Plantago maritima, subspecies crassifolia (sea plantain). It’s their leaves, which have one toothed lobe along their otherwise smooth edges, which mark them as this subspecies.

Then very appropriately for a port, there were a number of plants with transatlantic and other distant connections.

First, a very curious flower produced by the fleshy-leafed species, Chenopodium chenopodioides  (a species of the Goosefoot genus) which belongs to the same family as fat hen – Amaranthaceae.  I saw some at Sant Pol beach too. The flowers can be eaten but though they look like tiny strawberries they taste like spinach (which is a relative). Another relative (C. quinoa) produces quinoa, a seed which looks like a cereal but isn’t, and which was first domesticated in Peru.

Then two from South Africa, Carpobrotus and Aptenia, which have become very common in gardens and municipal planting in this area because they need no watering. They are a mixed blessing, easy to look after and flowering most of the year but also tending to  spread and smother all other plants unless kept in containers.  I imagine the wild specimens are garden escapees. 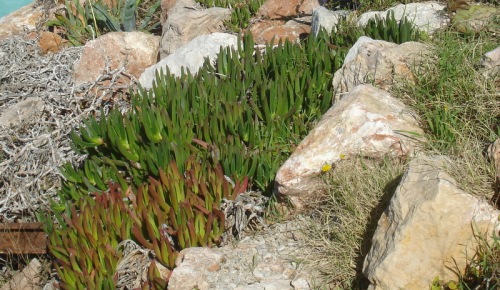 The last of the plants with famous relatives living abroad is Solanum villosum, the characteristic flowers reminding you of those South American imports: the potato (S. tuberosum) and tomato (S. lycopersicum), and in fact S. villosum flowers do produce little orange tomato-like fruit.

Another species from the same genus, the aubergine (S. melongena) was first domesticated in India, and came to Europe via the Arabs in Spain (Persian badin-gan became Arabic al-bādinjān, Catalan alberginera, and French aubergine).  Sweet and hot  peppers (Capsicum) are cousins. Other genera from this family, the Solanaceae, such as  Datura and  Nicotiana also came originally from South  America: there was clearly  a  great radiation of this family in the tropics. As we know from the Nightshade plants, almost every plant in this family is poisonous to some degree, containing the toxin Solanin. That’s why you shouldn’t eat green tomatoes unless they’re cooked, which destroys the toxin. This raises the question for me: how come the very toxic wild ancestors of the cultivated plants got domesticated?  How many experiments laid low or killed the experimenter? Were those little berries just too tempting?

The boats in the harbour prompt me to play you some songs by someone whose work I’ve come to like more and more: the Brazilian Vinicius Cantuaria, now longtime resident of New York but whose bossa and samba roots show in most of his songs and his guitar-playing. The first is a classic bossa nova song from its heyday in 1962: O Barquinho (little boat), written by Roberto Menescal and Ronaldo Bôscoli, this version from Cantuaria’s album Horse and Fish (2004).

And while I’m talking about Vinicius Cantuaria, I’ll take the chance to play something from one of my favourite albums of 2011, Lagrimas Mexicanas, which he made with Bill Frisell. This is Calle 7.

Coming up in the next few weeks: Can flowers be stars on film? And a round-up of some recent discoveries.