It’s the position I have to adopt to take pictures of what’s going on up on the sauveplaine at the moment. I wrote about my discovery of this area here on the blog two years ago, and I go there about as often as believers go to church/chapel/mosque etc, and for some of the same reasons: awe at something which is much greater than myself. There are lots of flowers coming into bloom, but many of them are little, low down or downright ground-hugging. I was on hands and knees anyway because the thyme is in flower and this is the moment to pick the delicate tips, which have the most flavour, and take it home to dry for seasoning dishes during the rest of the year. 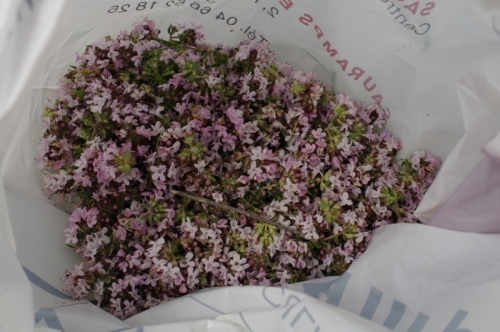 I wasn’t the only one appreciating these miniature bouquets – I had to be careful not to pick bees at the same time. 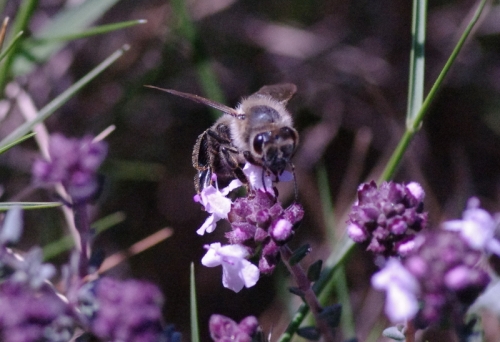 I know there are many species of bee, and maybe some kind person, say Morgan from the wonderful blog The Reremouse will tell me which this is. She has a different standpoint: she once wrote that she sees a flower as something for insects to perch on, while I see an insect as something which flowers use to have sex.  If you’re interested by nature – and why else would you be reading this – and you don’t know The Reremouse, you’re missing something. So what else did I see while I was down there on the ground? I’ll start with the highlights: two orchids. The first is the common Yellow ophrys (Ophrys lutea), of which there was quite a colony. 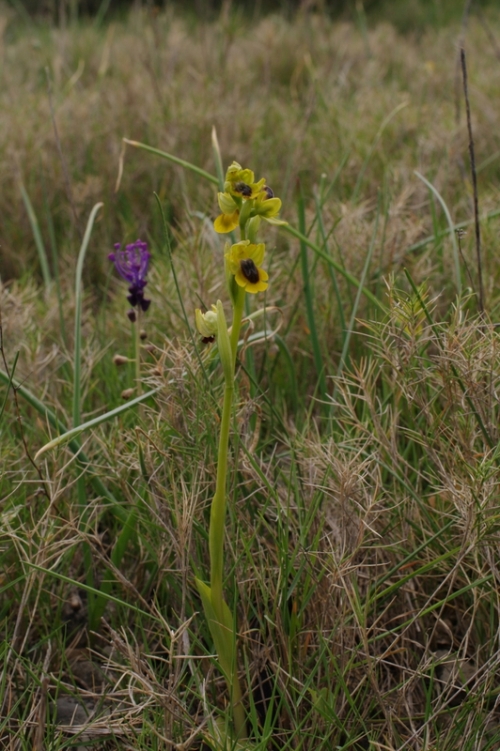 The other was the white orchid , Narrow-leaved helleborine (Cephalanthera longifolia). 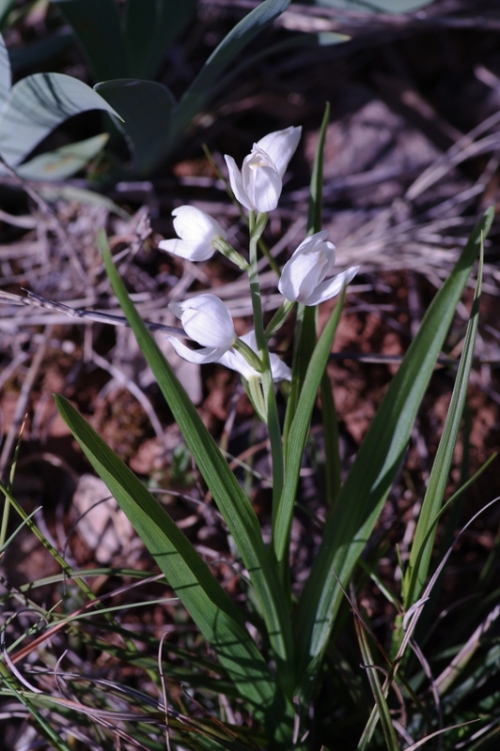 Now two ground-hugging prostrate plants which I photographed for the first time the other day on the sauveplaine. Both from the same family, the Fabaceae – you know, beans and peas and all that.  The first is a sort of broom, Cytisus supinus, which I identified with the help of another excellent site, Florealpes.  The site says this plant can be confused with a Bird’s foot trefoil (Lotus spp.), one difference being that the latter has leaves with stipules, little mini-leaves at the base of the leaf-stalk, while the former doesn’t. 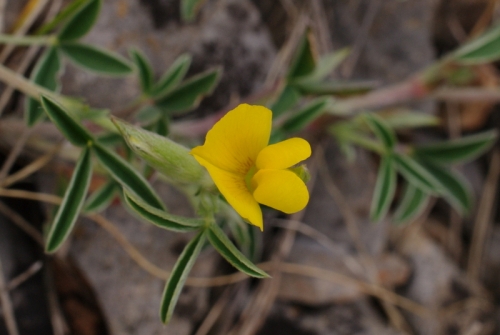 This sort of plant is often most easily identified by its fruit, since the flowers and leaves are very minor variations on a common pattern. I was lucky to have caught the charactersitic fruits of the second plant, Hippocrepis biflora, which are flattened and a bit like a strange saw-blade. 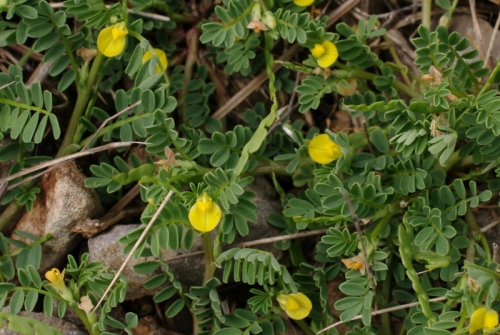 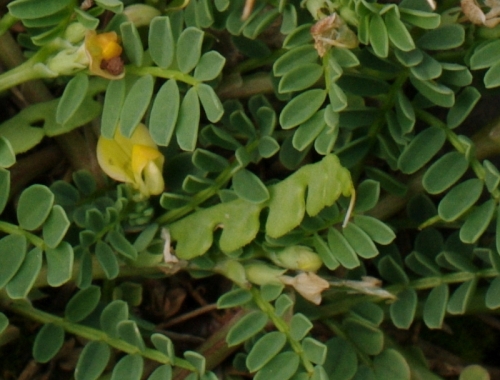 Hippocrepis biflora – the fruit like a saw, or something

And the rest? A quick round-up, starting with a couple of spurges – a favourite of mine – I did three posts on the genus a little while ago. The common Euphorbia serrata: 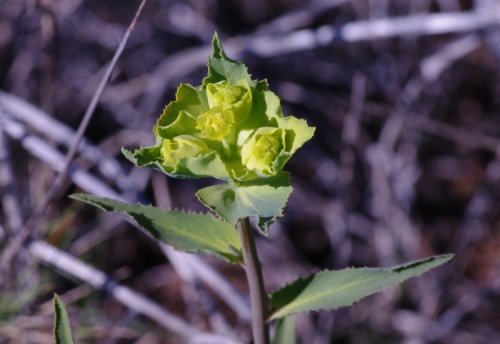 Euphorbia serrata – one of the most common spurges on the roadside

and a rarer sight, the remarkable Euphorbia exigua: 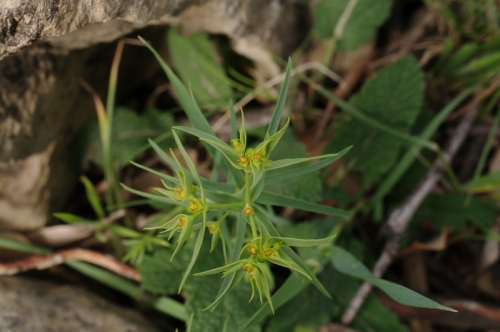 A Star of Bethlehem, Ornithogallum montanum: 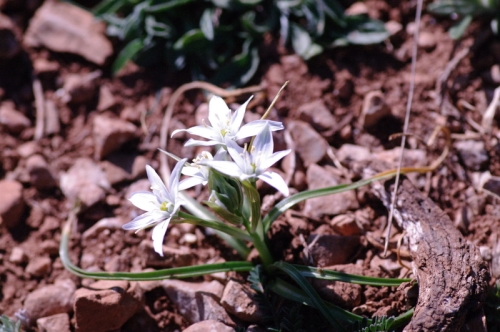 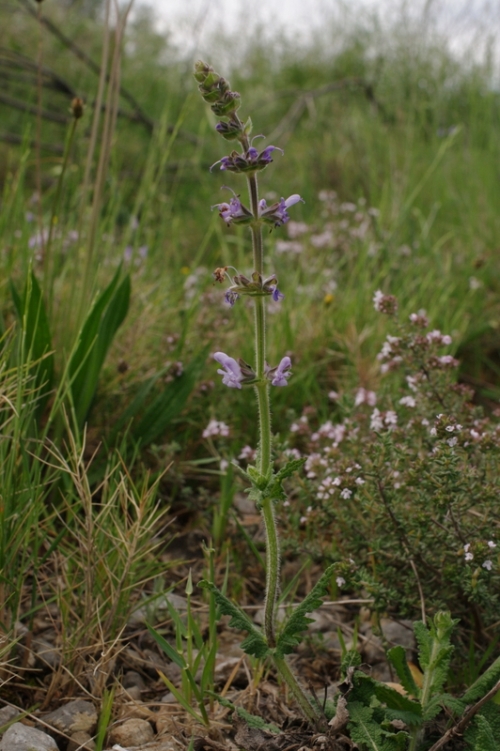 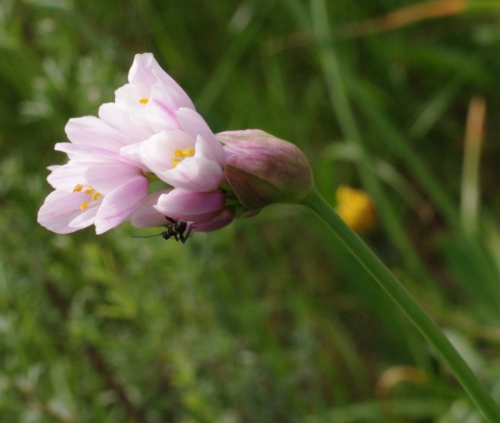 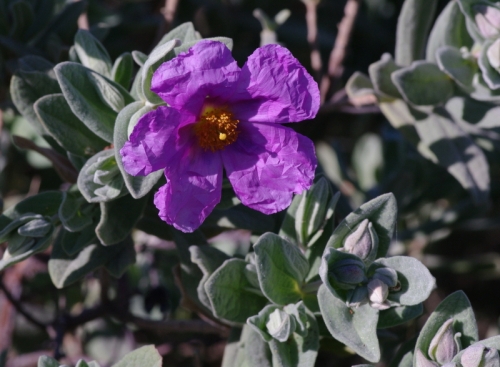 The title for the jazz came easily from a phrase I found I’d written: it’s the guitarist Grant Green with the tune Down here on the ground. 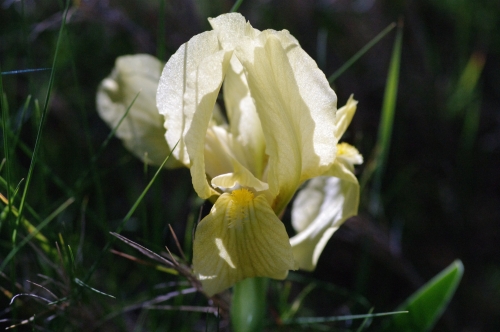 A moment this week which I’ve been anticipating keenly – my first sight of the dwarf iris, Iris lutescens, in the garrigue near where I live. Why is it special? Because it’s beautiful, its form enhanced, in my view, by its modest size – usually only about 20cm high. Its name comes form the Latin for yellow, luteus, but there are common blue and white versions of the same species. 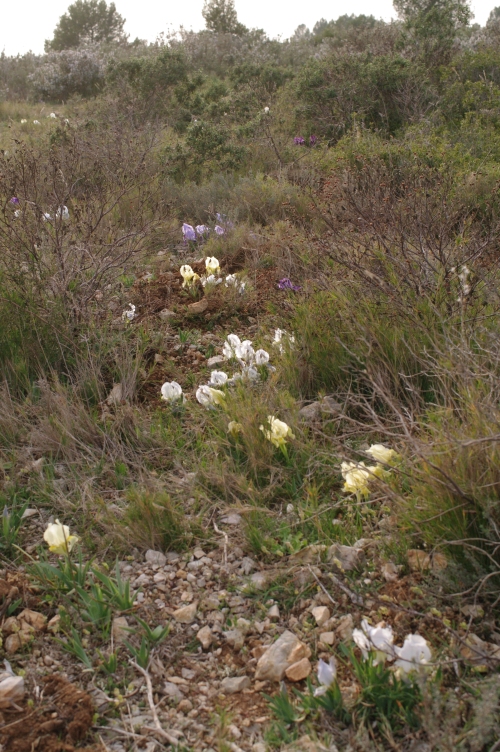 Irises – it has to be said, probably the taller species – have impressed us humans for a long time. The upstanding slim pointed leaf-blades have reminded all cultures of spears and swords: the yellow flag iris is called Jacob’s sword in English, and other names such as segg and gladdon or gladwyn betray repectively Anglo-Saxon and Celtic words for swords too. The blue or white irises seen often here on banks and in ditches are Iris germanica, called la cotèla (knife) or la cotelassa (dagger) in Occitan. I think that’s one reason why I prefer the smaller, less warlike dwarf iris – ‘nail-scissor iris’ wouldn’t have the same belligerent ring to it.

The large species have showy flowers, of six tepals (the name used for the similar petals and sepals in this family of plants) carried on long stems, and perhaps for these reasons they were sacred to the ancient Egyptians who used a symbolic representation of the plant on the first sceptres, and they also appear in pictures and artefacts from Babylon. 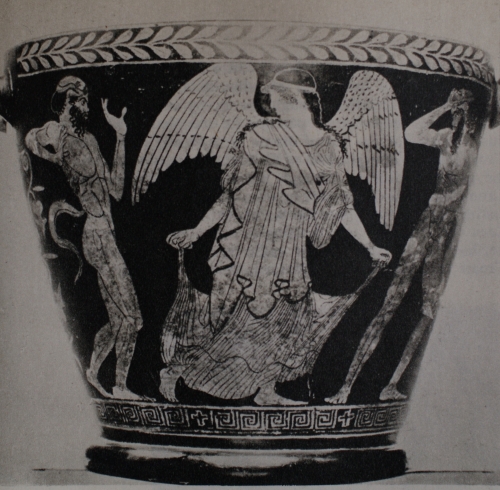 The Greek goddess Iris portrayed on a drinking vessel

The name iris means rainbow in Greek, and it is supposed that the plant was so christened because of the range of vivid colours in each flower, as well as between varieties and species. Greek mythology includes the goddess Iris, who acts as a messenger for the gods, particularly Zeus and Hera, when they need to communicate between each other or with mortals. This may be because the rainbow seems to connect heaven and earth. There are two statues of Iris among the Elgin marbles.

Exactly when the plant acquired its present name is not clear – the term iris is used by Pliny the Elder (23-79 CE) in his Natural History, in which he describes in detail the cultivation of irises in northern Europe for their magical and medical properties. Three months before harvesting, the ground around the plant was soaked in honeyed water, and three circles were drawn around it with the point of a sword.

But then this name seems to have been forgotten, and until the 16th century they were commonly given either the sword-names listed above, or fleur de lis or flower de luce. One explanation for the latter is because the yellow flag iris, Iris pseudacorus, grew plentifully by the river Luts (or Lits) in what is now southern Belgium, and a symbolic representation of three of its tepals was adopted by Gaulish and Germanic kings as the well-known heraldic symbol of the fleur-de-lys. It became the emblem of the French royalty since Louis VII, so identified with the royal cause that anyone wearing the flower after the French Revolution was likely to be sent to the guillotine. Napoleon substituted the bee as a national emblem. 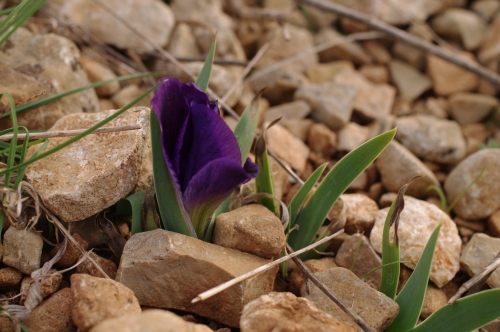 The flower pushing its way between stones

The dwarf iris is a tough customer, native to the Mediterranean region of France since it positively thrives in heat, drought, and on poor limestone soils. It’s often dug up for transplanting to gardens, but conditions there may well be too rich for it. In the garrigue you often find it among patches of rock and stone chips where no other plant can get a foothold. 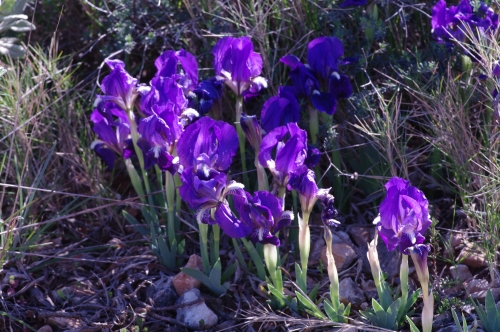 I have other, more personal reasons for my attachment to this flower. It was in a patch of garrigue near M’s house that I first saw a carpet of these flowers, lighting up the hillside like flames, so they remind me of walks we’ve taken together. So to accompany this post, why not Georgie Fame and the Blue Flames, because if M asked me if everything is OK, I’d say ‘Yeh, Yeh’.