The lily of the sea: the future of Catalunya and its sand dunes 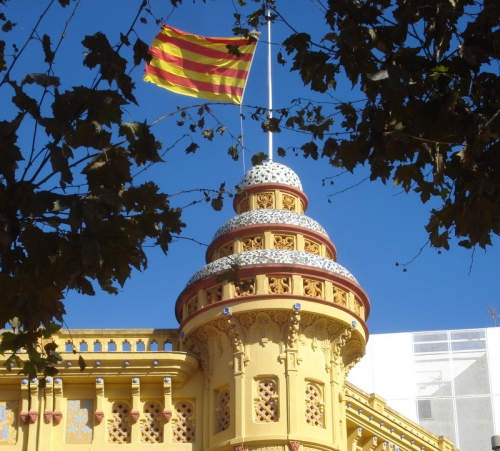 Next Sunday, 25th November, Catalans will vote in regional elections called by the majority nationalist party, the CiU led by Artur Mas, whose outcome everybody realises will be a decisive move towards, or away from, complete independence for Catalunya from Spain.  When we were in Sant Feliu de Guixols on the Costa Brava at the beginning of November it was also the beginning of the electoral campaigns, and posters everywhere – those of the conservative CiU and of the Left – displayed the Catalan independence flag of four red stripes on yellow, with a red star, as did many shops and private balconies .

In this heated atmosphere, further stoked by clear skies and hot sunshine, we went to the beach of Sant Pol, north of Sant Feliu, mainly to see the Modernista houses constructed at the end of the nineteenth century by local people who had gone to Cuba and made fortunes in sugar and tobacco trading.

This one is casa Estrada, known locally as La casa de les puntxes from its nine pointy turrrets.  It was designed by architect Josep Goday between 1890 and 1912 and is an icon of this beach, but it badly needs some renovation, in contrast to the many new luxury villas all around.

I think I came across an even greater treasure: the remains of a once-extensive system of sand dunes and their rich flora. The dunes are now restricted to a narrow strip protected only by a low rope barrier, in front of the beach services – toilets, canoe hire – and new blocks of low-rise apartment buildings. I did like the drunken angles of the beach constructions, making them seem to sink into the sand – though actually of course the dune flora is the more fragile. 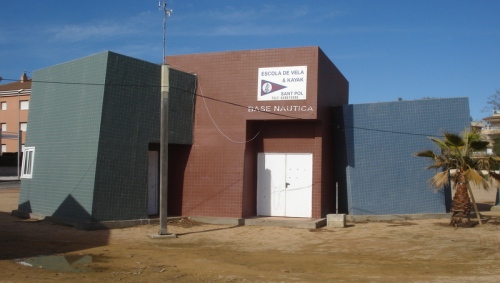 I was taking photos when a couple stopped to tell me I should have been there earlier to catch the lliri de mar – the sea lily – in flower.  I think they spoke Catalan, and in reply I used most of my ten words of Castilian (Spanish) – all except those for ordering beer. And maybe some Occitan.  It was a nice friendly chat. I think they were proud of this tiny reserve – the Parc de les Dunes – and its effort to preserve a rare coastal ecosystem.  The variation in factors such as sun, wind and sea-spray across the dunes makes for a lot of environments in a small space, and hence a rich flora despite the poverty of sand as a growth medium – as this sign pointed out (in Catalan):

The sea lily has two very clever adaptations to dune life, where the wind can raise or lower the level of the sand without warning: like many bulbs, its roots contract and pull the plant down into the ground, but on the other hand if the stem begins to become buried in sand it grows some more to push the flower into the light.  If you want a symbol of the resilience of small nations, there it is.

The sea is not the only adverse factor: the huge growth in tourism means that Sant Feliu now has a year-round population of some 20,000 (as opposed to 7,000 in the ‘50s), and many times that in the summer. The best flat agricultural land has been taken for building, and we could see that all around the town agriculture had been more or less abandoned, the fields choked with weeds, maybe in the hope of construction projects which are unlikely to come in the recession. The newcomers who did arrive need water, and roads, and car parking, and they – we – walk and drive and sit on land that was not long ago quite wild, and our rubbish is washed out into the sea. To quote a study of the Catalan National Parks by Barcelona University:

The coast has also undergone heavy man-made changes in recent decades. There are currently two types of littoral communities: one established on the sand (beaches) and the other on the cliffs. The dune vegetation is the one that has been most damaged, up to the point of being reduced to the presence of isolated, mainly nitro-halophil [ tolerant of nitrogen and chlorine] plants, such as Cakile maritima…

Apart from that I discovered still in flower the lovely tiny florets of Crambe hispanica (Spanish seakale) EDIT: this (below) now looks to me like Lobularia maritima – sorry for the confusion, but I’m new here myself!

I could also see the drier stems of sea holly (Eryngium maritimum) : 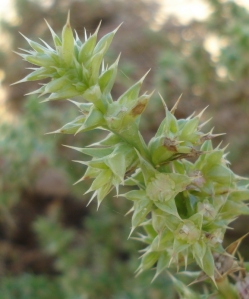 and Echinophora spinosa (this picture taken earlier in the summer by Chaiselongue):

These  grasses with wonderfully soft seed-heads are Imperata cylindrica:

PS –  Should you be in Catalunya and want to identify flowers with the help of photos, or translate names between Catalan and scientific Latin names, try the splendid site floracatalana  – click here.

The Parc de les Dunes was not the only unexpected delight of the week: I was very happy to find in Sant Feliu a music shop that stocked not only guitars, other instruments, CDs and  music books – but used vinyl too!  Among other things I came away with some Lluís Llach LPs  and it seems a good moment to play one of his best known anthems, L’ Estaca (The stake). I quote Colm Tóibín from Homage to Barcelona, talking about the time just after Franco died:

Lluís Llach was perhaps the most popular among the new singers. He came from Verges, where the Easter procession of La Dansa de la Mort, the skeletons’ dance of death, had been preserved. His song L’Estaca became the battle-hymn of Catalonia in the last years of the old regime.  It was about a stake in the ground, and how if you beat at it for long enough it would fall. The chorus repeated the word fall, and everybody knew what the stake was, and everybody who sang the song wanted it to fall, fall, fall.

Almost 30 years later a new generation of Catalan musicians took flamenco as their inspiration: the ensemble Ojos de Brujo (The Eyes of the Sorcerer) took their high-energy musical fusion to every festival a few years ago, and though they’ve been less busy lately, their live shows – of which I also picked up a DVD in Catalunya – were something else.  From that ‘Touring Bari’ DVD, here’s Memorias perdidas:

Coming up next: another day out at the coast.