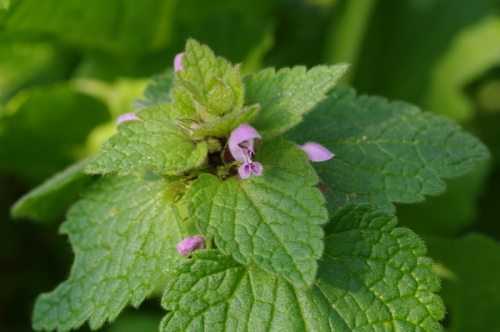 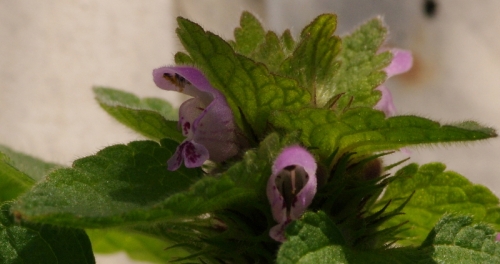 Also known as purple archangel – though the name is usually used for the yellow-flowered  L. galeobdolon.  This powerful name came from the Latin archangelica, recorded as early as the 10th century, which also covered other Lamium species and was later applied to the plant now called Angelica, which everyone knows from the candied stalks. For the latter, it was said that an angel revealed its medicinal value against epidemic infectious diseases, but the origin of the other angelic names for deadnettles is lost in time – Grigson suggests that there may be a lost legend about an archangel relieving these plants of their sting in recognition of their healing properties.

Leaving supernatural revelations aside, we should still be truly grateful to the plants of the family to which deadnettles belong: the Lamiaceae, formerly Labiatae – both names because the flowers have upper and lower lips resembling a mouth. They’re a pleasure for the palate too, since they include many if not most of our aromatic herbs (thyme, oregano, marjoram, savory, mint, lavender, basil, lemon balm and sage), and many more of them can be used in salads, sauces or to make tisanes. The production of large quantities of aromatic oils is an adaptation which reduces water loss by evaporation, enabling these tender herbs to survive hot Mediterranean summers. Young leaves of red deadnettle can be used in a salad, especially for their colour I imagine, but their taste in cooking is apparently nothing to write home about.

I’ll come back later to the more aromatic plants in this family. I’ll just mention that they’re even more valuable to insects: red deadnettle can flower all winter in a mild climate – I took the pictures above last week –  and so it’s a useful source of both pollen and nectar for bees when there’s not much else available.

I’ve just found a stunning video which really relates to my last post and the orchid Anacamptis pyramidalis. I found it on the ARKive site – worth a look for wildlife videos, especially for schools. The film shows exactly what Darwin was writing about, as the moth collects nectar and can’t avoid getting pollen sacs glued to its proboscis, and then takes them to fertilise another flower.  More oral gratification for the moth – but I wonder how it gets the pollen sacs off again – must be worse than a bit of sellotape on your fingers. You can find the video by clicking here.

What else could I play now but ‘Lucky lips’, by Ruth Brown, from 1957.  Her energy and bounce were incredible, and she sold so many records for Atlantic that it became known as ‘the house that Ruth built’. If you watch her lips closely on the video, you’ll see that she’s singing another song, but hey, what do you want for free entertainment ?