It’s nothing: Gainsbourg and apple mint

What, Serge Gainsbourg? And botany? Are you mad? Or is that one of his scandalous videos?

Yes, that Serge. Now for some time I’ve thought of this singer and songwriter as a showman, a celebrity enfant terrible, a drunk, offensive, sexist and racist (comparing reggae musicians to monkeys) – and despite/because of this, a counter-culture hero in France. He probably was at least three of these at any one time. But one of his songs may force me to change my opinion of him – it’s Ces petits riens (These little nothings) which I’ve heard in a number of versions lately and can’t get out of my head.

And the botany? I was coming to that. I don’t think Serge ever went picking wild flowers, unless he thought it was a cheap way to get a woman into bed, so the connection is more semantic: the little things we ignore or overlook.  First, a herb whose tiny flowers are lost amid the other straggly weeds at this time of year, and secondly an update on a creeper in the shade: the leaf forms of Smilax aspera, mentioned in the last post.

Despite the rain we’ve had, there’s not a lot flowering at this time of year, but what there is I’ll try to cover over the next few posts.  Apple mint (Mentha suaveolens) is flourishing: single plants are often unobtrusive since the flowers are so small, but sometimes, thanks to its long creeping  stems (stoloniferous habit), it covers a whole bank which then takes on a lilac sheen.  It’s a good garden herb too, but the characteristically rounded leaves are very small.

Even against the sun, you can see the round leaves of this mint

The other petit rien is to show you just how variable the leaves of Smilax aspera  (see previous post) can be in both size and form, depending on whether they are in full sun, part sun or shade.  First, full sun: 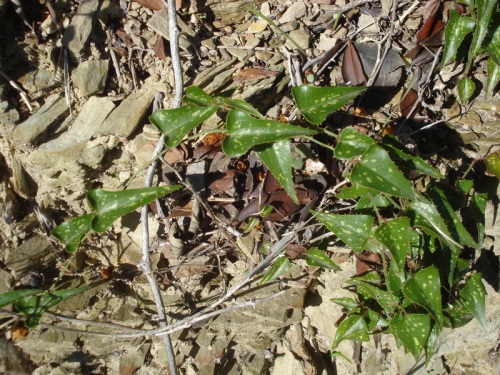 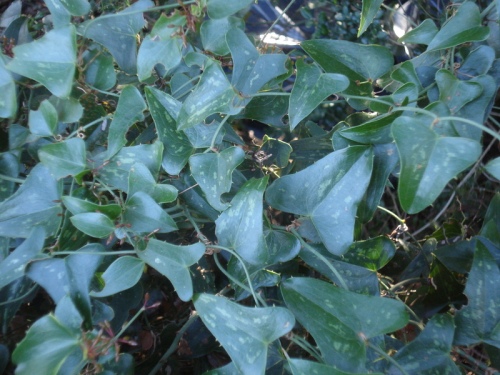 So, on to the song. I keep hearing it in jazz gigs – the latest a week ago in our neighbouring village by a quartet led by saxophonist Serge Casero ( you can see and hear his interpretation here).  Gainsbourg’s original version is from Percussions (1964), an album in which he wanted to minimise melody in favour of the African percussion settings. The effect, followed pretty faithfully by Casero and most performers I’ve heard, is world-weary and nihilistic – it is a song about nothing, after all (French lyrics here).

The last version below, by American-born, British-resident singer Stacey Kent, is being played a lot at the moment on the French jazz radio station TSF.  It’s from her 2007 album, Breakfast on the morning tram, and this one discovers much more melody in the chord changes and becomes rather wistful and ironic.

So is my opinion changing? These days I do find myself  playing and liking much of Gainsbourg’s  jazzier work from the early 60’s , though I mentally subtract the Gainsbourg posture, if you know what I mean. I think  Ces petits riens is a clever song with hidden depths of melody,  which has become a standard for French jazz groups, and if it has a lot of word play (of which there’s often too much for my taste in chansons), I can still imagine some of the couplets in a philosophy exam:

‘It’s better to cry about nothing than to laugh at everything’ – Discuss.

Coming up soon: that’s another vine mess you’ve got me into.

PS – This is an amended version of an earlier post.