Going against the flow

I had an eye-opening experience last Saturday. With friends, I went to the Domaine of winemakers Bernard and Christine Isarn (the Domaine de Cadablès – pronounced cadder-pless- see more here) and did the balade vigneronne: a walk round the vineyards. Over a couple of hours, as we weaved our way round his 30 hectares on the side of an old volcanic hill, Bernard explained the principles behind his methods of growing vines. I wrote a short account on my Blip journal here, but knew I should say a bit more about it on my blog. Everything Bernard and Christine do is aimed at supporting the greatest possible biodiversity, of micro-organisms, fungi, plants and animals. 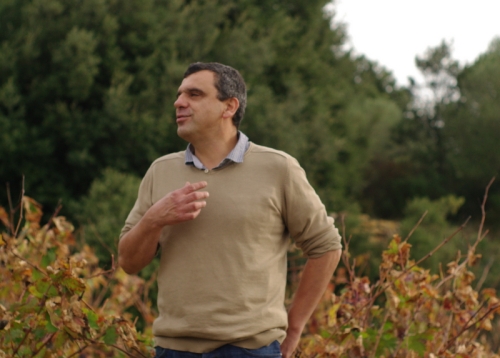 Firstly, he doesn’t remove the weeds between the rows. He lets them grow over the winter, then ploughs them in as green manure and leaves them. Sometimes he lets his two horses into the vineyards to eat the weeds and leave their manure. If the weeds don’t grow as high as the vines, he says, they’re no problem, and passing through with a tractor again to cut them would compress the soil and risk damage to the vines. The vines are mostly old, and he supposes that their root systems go perhaps ten metres deep, and may be up to thirty or forty metres long, so they’re not threatened by a few surface plants.

Thirdly, between the plots he leaves stands of trees and bushes – they were there already since it was a property which had been abandoned for some time. He thins the trees to let light in, uses the trunks as firewood, and leaves the branches and trash on the ground for the insects and the fungi. Birds started out of the brush as we walked round, and he is very proud of that. Of the 30 hectares of the Domaine, he has only six and a half actively under vines. 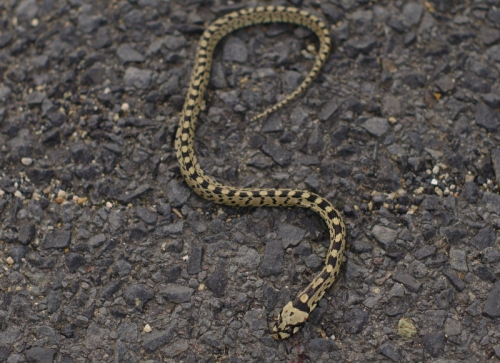 Fourthly he manages the resources he finds to increase diversity of habitat – finding a spring on the land, he scooped out soil to create a marshy area to encourage reeds and water birds and so on.

The view from the hill of Cadables – the Mediterranean is on the horizon, thirty kilometres away.

Does this work? I told Bernard about the experience I had this summer of picking in a parcelle of Grenache vines which had been abandoned for two years. The weeds were high, the grapes small since the vines hadn’t been pruned, but there was no mould and the vines themselves looked surprisingly healthy. Bernard nodded and said he expected to boost natural control of pests, and revitalise the soil. ‘The soil is alive’ he kept saying ‘you have to feed it and let nature work in it.’

Bernard and Christine have had the Domaine for nine years, and when they started he took his grapes to the local Cave Cooperative. But the advice they gave him infuriated him. ‘They were only interested in quantity’ he says, ‘and they suggested ripping up my 60-year old vines, replanting, spraying, replanting again every fifteen years when the vines wore out. I came out of the Cave saying to myself that I wanted to follow the opposite path – le chemin à l’envers‘ and this has now become the name of one of his red wines. It also means, for him, the opposite to the conventional commercial relationships: ‘Usually the big buyers and the big agricultural companies are on top of the pyramid’ he says, ’and the poor little producers are all at the bottom, powerless. I wanted to change all that and put the individual producer at the top. I am my own boss here.’

He has been producing his own wines for four years now, after serving an apprenticeship with another, more experienced, local winemaker. I’ve been buying and tasting his wines for the last three years, and to my mind they get better and better. This is surely in part due to his increasing skill as a winemaker, but the intensity of flavour speaks of the health of the vines and the way they can extract minerals from the soil – something boosted by fungal mycorrhizal associations as I wrote about here.
I’m looking forward to going back in the spring to see what biodiversity of plant life emerges, particularly in the new wetland area. Expect further updates.

The next day I heard about a startlingly similar project all the way away in Brazil. The Food Programme focused on Leontino Balbo Jnr. and his experiments on a huge scale with organic sugar production in Sao Paulo state – listen again here. He says he learned about natural balance in the forest as a child, and decided when he started working in the family firm to try a variety of cane which had been rejected by Brazilian growers because it was vulnerable to disease. He returned the cane leaves to the land instead of burning them – an addition of 20 tons of organic matter per hectare, and designed new tyres for the farm machinery to avoid compressing the soil. He had to wait five years, but noticed that the vulnerable cane was now free of disease, and beginning to crop more heavily than ever. At the same time, the number of species of insects and vertebrates in the cane fields zoomed up.I don’t have space to describe in full what he has achieved, so I recommend his talk, illustrated with slides, on youtube.

It was given to a Business Social Responsibility conference in 2012. A long article about him and his ideas for all farming, which he calls ERA: Ecosystem Revitalising Agriculture,was published in the magazine Wired here.
One of his comments struck me as just like the approach of Bernard Isarn:

The chemin à l’envers again. Long may both Bernard and Leontino run contrary to the predominant stream, and may they convince others. At the very least, the work they’re doing is conserving a reserve of biodiversity which one day will help us all.

9 responses to “Going against the flow”