This lovely thistle is nearing the end of its flowering period now, but still looks perfectly adapted to a hot dry summer: strong stems, leaves reduced in area by divisions and spines, and a waxy surface and hairs to reduce evaporation.  It likes grassy, stony habitats, such as this iris-covered bank. My guide says it is absent from the islands apart from Sicily – other thistles are only on islands, and this should make us think about evolution.

It would have been known to Aristotle (384-322 BCE) when he conducted his studies of nature in Athens – but perhaps not when he studied animals on the island of Lesbos.  He wrote much more about animals than about plants, and it was his pupil Theophrastus who really deserves the title ‘Father of botany’ if such appelations have any meaning.  So what were his contributions? In my view, two positive ones and some hindrances which still persist today. 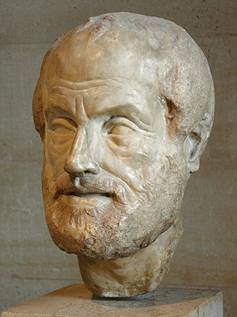 Firstly, Aristotle made one step toward science when he insisted on observation (including dissection of animals) as the basis of knowledge. Secondly he began to classify the natural world, to distinguish similarities and differences and give species both family and individual names.

But Aristotle made some errors: for example believing that some animals and plants could arise spontaneously from decaying matter.  This idea lasted well into the 19th century, when epidemics were often attributed to ‘germs’ arising in warm and damp conditions.

His other, greater, but equally misleading idea has also proved persistent: that of a progression in which all living things were arranged in order in an ascending series from minerals, through plants, then animals and finally human beings.  Aristotle used his classifying principles to explain this: plants could grow and reproduce unlike minerals, but could not move or sense like animals. Trees were seen as ‘higher’ than herbaceous plants. Sedentary animals such as clams and oysters could touch and taste but not move, see or hear. Man, the ‘rational animal’ was at the top.

This idea fitted naturally into Christian theology, and became known as the scala naturae  –  ‘ladder of nature’- or the ‘Great Chain of Being’, with Man on a special rung between animals and angels, with the gift of a soul.  Even today, I would bet that a majority of Westerners would subscribe to a version of it.  Why is it wrong? Because, as Darwin showed, species are not fixed on their rungs but have arisen from other species, many of which are now extinct. OK, it might be argued, lots of us have ladders in the shed with missing or repaired rungs. But it’s the idea of climbing, progress that’s an error: how should we estimate ‘success’ or ‘higher evolution’? Grasses are more recently evolved than oak trees, and orchids more recent still: should they be highest? In terms of numbers of individuals, algae and plankton outnumber other plants: are they the most successful?

It is becoming clear as we know more about the changes in climate, geology and the history of the Earth including meteorite collisions and glaciations (‘ice ages’) which have made for mass extinctions of species, that what exists today is the result of many accidents.  The paleontologist Stephen Jay Gould says repeatedly that if we re-ran the history of the world like a rewound tape, the outcome would be different, and that it would be extremely unlikely that human beings would feature at all.  So this leads me to the history of the Mediterranean, involving a timescale and set of concepts such as plate tectonics which were unknown to Darwin, let alone to Aristotle. 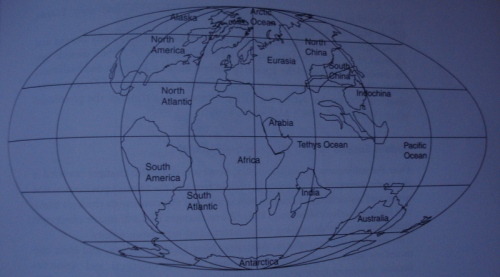 The continents 70 million years ago

50 million years ago, just as herbaceous seed plants were getting going, the Mediterranean did not exist. The gap between the European/Asian tectonic plate and the African/Arabian plate was filled by the ocean Tethys until the northward movement of the African plate sealed off the eastern end.  Species could now move out of Africa into Europe. 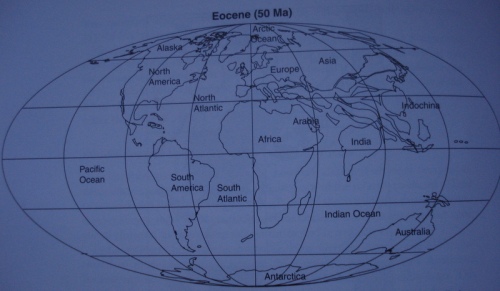 About 35 million years ago the Italian land  mass was crunched into the European plate, raising the Alps, and the same movement eventually sank the land to the west (the present day Gulf of Lion) so that the sea reached the foot of the Larzac plateau some 100km inland from the present coastline. Throughout this Tertiary era, partly as a result of the mountain-building, the climate became cooler and drier.  Around 5 million years ago the moving African plate closed the western end of the Mediterranean, and since loss by evaporation exceeds inflow from rivers, the sea dried up, leaving salt lakes in eastern and western halves of the basin. After several hundred thousand years, the Atlantic broke back in, but not before elephants had crossed to Cyprus and Crete. In the Pleistocene, starting about 1.8 million years ago, a succession of ice ages produced thick ice sheets in northern Europe, locking up the Earth’s water and lowering the sea level by around 100 metres, so that the Gulf of Lion and Gulf of Sirte (north of Libya) became dry.  Within the last million years continued plate movement has raised volcanic peaks around the Mediterranean basin – my own village has three, and others include the Mont St Clair at Sète and Mont St Loup at Agde.  Black volcanic basalt is a common building material in the area.

It was only 10,000 years ago that the melting ice raised sea levels again to about their present position, and washed in the sediments in which coastal plants now grow.  What does all this mean for the evolution of plants? Firstly, they have had to adapt to cooler, drier conditions, and hence the rise of the grasses and of the typical Mediterranean ‘sclerophyllous’ vegetation: plants with spiny leaves such as Echinops, or thick or waxy leaves, all to reduce water loss. Secondly, the land connnections meant that plants could more easily arrive from Africa – these could include the spurges and palms. Thirdly the isolation of pockets of plants by the ice meant that plant communities could evolve separately and diversely – maybe one reason for the Mediterranean richness of flora.

So during the ice ages the Mediterranean vegetation was more like Siberia , dominated by grasses and with few trees, unrecognizable to Aristotle ( a steppe-ladder of nature?).  Even now the plants round my village are completely different from the range that was here before the Romans, which must have consisted mainly of oaks and whatever could survive beneath them and in clearings.  No vines, no olives, no fruit trees. The current Mediterranean landscape, which reminds us so much of age-old civilisations, is just a still from a moment in a movie.

Or a video. And since this is a ‘bassics of botany’ post, here’s a clip from the outstanding young bassist Esperanza Spalding playing live in San Sebastian (Donostia).  It’s from a Spanish TV broadcast, and all the parts are worth watching. This show may seem to start a bit slowly and the star saunters on stage with a cup of coffee about two minutes in, but then the excitement just builds…