And the botany medal goes to….

I gather there’s a festival going on in East London of running, jumping and throwing things.  And for the first time this year, throwing matches apparently, as well as spears and balls and plates.  As part of the build-up, I heard a World Service broadcast from Spitalfields Market which reminded me of the great English herbalist and revolutionary Nicholas Culpeper (1616-54), who in 1640 set up his practice in Red Lion House just east of that market, and at that time in open country.* 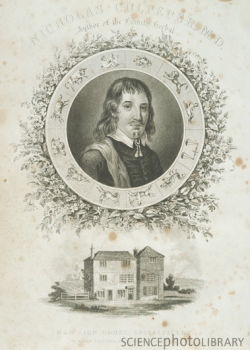 Above, Culpeper surrounded by the signs of the Zodiac, and Red Lion House.

The British press has been full of aspiring athletes struggling against adversity, but how many compare with Culpeper for bad luck? His clergyman father died just days before Nicholas was born, the family thus losing a substantial inheritance.  Secretly in love with a young woman whose family opposed their relationship, he arranged to meet her in Lewes and elope to the continent: her coach was struck by lightning en route and she died.  The griefstruck Nicholas’s tryst being discovered, he lost his place and funding to study medicine at Cambridge.  Six of his seven children died before he did. Though working as a field medic rather than in the front line in the English Civil War (on the Parliamentary side), he was seriously wounded in the chest and never fully recovered, dying at the age of  38.

These experiences and his Puritan background made Culpeper a revolutionary. Not able to take a medical degree, he had to fight against the established power of the physicians and apothecaries who used their specialised knowledge and command of Latin to maintain a monopoly and charge the fees to go with it.  Culpeper established his herbal practice outside the City of London to escape some of their regulation and to treat the newly arrived poorer workers of the capital, charging low or no fees. He described the Royal College of Physicians in these words:

They are bloodsuckers, true vampires, have learned little since Hippocrates; use blood-letting for ailments above the midriff and purging for those below. They evacuate and revulse their patients until they faint. Black Hellebor, this poisonous stuff, is a favourite laxative. It is surprising that they are so popular and that some patients recover. My own poor patients would not endure this taxing and costly treatment. The victims of physicians only survive since they are from the rich and robust stock, the plethoric, red-skinned residents of Cheapside, Westminster and St James.

After the success of the Parliamentary side in the Civil War (for which he raised a troop of 60 men), the Court of the Star Chamber was abolished and for the first time he could publish the main works of medicine, such as the London Pharmacopoeia, in English without fear of prosecution. He also made his own knowledge available to all: his Complete Herbal (1640) was the first herbal in English which used the English terms for hundreds of common plants, gave clear and full descriptions, and avoided expensive and rare imported herbs.  For those who are interested, there’s a good short biography here.

However, I take issue with some elements of this bio and many others, which tend to the alternative side of health practice.  Why? Firstly, because they tend to be uncritical of Culpeper’s almost complete reliance on astrology, with which he was obsessed, to classify, diagnose and treat illness. In the Complete Herbal he writes: ‘Such as are astrologers (and indeed none else are fit to make physicians) such I advise…..’

Secondly, because they skate over the fact that many of his ‘medicinal herbs’ are in fact poisonous – it is unfortunate to say the least that many of his reprinted works have no addenda to point out the dangers of aconite, hemlock and nightshade, for example. The poison garden website is a good reference to check simple trust in naïve herbalism. The edition Culpeper’s colour herbal  (ed David Potter, Foulsham, 1983) is an honourable exception, with any risks clearly pointed out.

Thirdly, because there are some common errors which tend to spread through the web: that he was born in Spitalfields, for example (he was in fact born in Surrey). 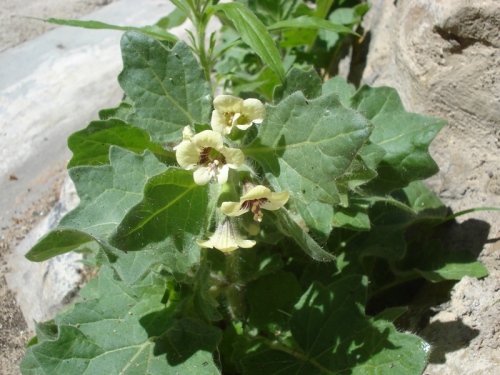 So, just to put you on your guard, here’s one of the poisonous plants from Culpeper’s herbal: white henbane, or Hyoscyamus albus, which I found growing in the street just round the corner from my house. To his credit, Culpeper does say of the Common Henbane (H. niger) that  it should ‘never be taken inwardly’, and his description is full of adjectives such as dark, ill, greyish, hollow, deadish, heavy, offensive, so you should get the message. And it’s in the name: ‘henbane’ means ‘hen killer’, the poultry connection perhaps because as a casual plant, it often arrives by seed on bare hen-scratched ground.  Culpeper suggests its external use for swollen testicles, lice, headaches,  deafness and worms in the ear among other things.  If you are an astrologist, you’ll want to know that it’s ‘under the domination of Saturn’.

* As far as I can tell, neither his house nor the pub next door – yes, the Red Lion – nor the address (Red Lion Street) still exist, being buried under the development of Commercial Street. Any Londoner who knows better is invited to correct me.

As for music, I guess this could well be one of the ‘bassics of botany’ series, so here is not only a great bass player but one of the most politically committed: Charlie Haden leading his Liberation Music Orchestra:

Coming up next: To be honest, I don’t know because I haven’t decided yet. But it will be soon. And it may feature a plant which has many forms: wild, culinary, giant and mythical.

9 responses to “And the botany medal goes to….”