This is a perennial, found all over France (except Brittany, maybe wrong soil), but rare in Britain.  It likes limestone  hillsides and woods – which is where I saw this one.

The Lady orchid was probably named after Our Lady, i.e. the Virgin Mary. Geoffrey Grigson comments that English plant names starting  ‘Lady’ often derived from German monastic herbals of the 16th century, and were unknown before these herbals were translated – similar English names before then tended to use the name Mary. It must be an Anglo-German connection: the French name is Orchis pourpre (purple orchid). 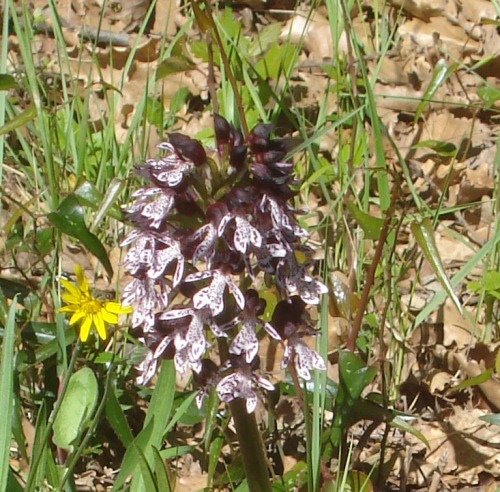 The Lady prefix tended to be used to honour particularly medicinal or attractive plants.  So Lady =  Pretty, and this plant is undeniably pretty.  But hang on, isn’t there a contradiction in the name? Yes, of course, orchid derives from the Greek orchis, meaning testicle, because of the shape of the underground tubers.

Something with balls becoming a lady? Here we’re in the realm of the latest Pedro Almodóvar film, La piel que habito (The skin I live in) – review here. Even more so if you consider the names of this flower in Occitan: l’òme penjat, l’embriaïga, lo soldat (the hanged man, the drunkard, and the soldier – a film title in itself). I think it’s the red face and lolling tongue – and maybe a phallic symbol too.  You can’t read much about orchids before realising that, as a village shop proprietress once warned me of the Sunday papers, ‘They’re just about sex, sex, sex’.

Firstly, the botanical side. The flowers of orchids have evolved such a huge range of strategems to achieve not only pollination, but cross-pollination (fertilisation with pollen from another plant of the same species) that they became fascinating to Charles Darwin as he developed evidence to support his recently-published Origin of species (see this photojournal which reminded me of an orchid anniversary).  The whole orchid flower is constructed to ensure that its own pollen does not reach its own stigma, and to this end is often adapted to a particular insect or other pollinator, which in turn adapts to the orchid – an example of coevolution.  The crucial thing about cross-pollination is that it increases the variety of the genetic make-up of the seeds, helping Darwin prove that sexual reproduction between unrelated strains was an evolutionary advantage.  He was well aware that he himself had flouted this rule in marrying his own first cousin, Emma Wedgwood, and all his life he worried that this was the cause of his children’s illnesses and frailties.

Certainly this orchid habit of looking outward for pollinating partners has resulted in rapid evolution in the family, with more than 24,000 species identified worldwide – four times as many as all mammal species put together.

Now the social/psychological side.  Orchid collecting became astonishingly popular for well-off Victorian gentlemen soon after the first exotic species were brought to Britain by plant collectors, who often followed in the wake of British Navy expeditions. Entire forests were stripped of millions of orchids. An English botanist wrote in 1878: ‘Not satisfied with taking 300 or 500 specimens of a fine orchid, they must scour the whole country and leave nothing for miles. This is no longer collecting; this is wanton robbery.’  Like Darwin at Down House, the gentry built hothouses and eagerly sought rare specimens which they had to pollinate by hand in the absence of the necessary insect– the craze became known as orchidelirium. Yes, gentlemen – after all, a rather obsessional hobby involving dangerous foreign travel, semi-legal activities, a whiff of exotic sex and ostentatious display of wealth and prestige: what’s not to like for a rich chap?

These flowers and these themes – Mariolatry, hanged men, the search for sexual partners and obsession in hothouses – should all feature in a film, say  by a gifted director with a taste for melodrama – come on, Pedro!

So back to his latest film – here’s Concha Buika, who features in it with this song En mi piel:

and just because I love her stuff and would like her to do an album with this guitarist, Javier Limón,  here’s  Oro santo:

Coming up soon: Cutlasses and communism.