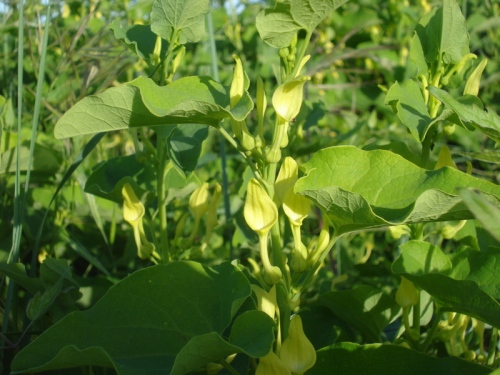 I’ve passed by this plant many times before and I’ve just registered it as ‘a weed’. I should have looked, and seen it was something strange – a birthwort, cousin to A. rotunda I posted a while ago here, but with smaller flowers and stalked leaves. A plant with a long history: there is a fossil record of this family from the Cretaceous (135-65 million years ago – the dinosaur era). It’s not exclusively southern, but native to most of Europe.  I wonder if it’s what Ceridwen saw in Godstow.

It  likes to be near some water, and I saw it just opposite a stream by the side of a patch of ‘waste ground’ (is there such a thing?) near our vegetable garden in the village.  Some who have followed Chaiselongue’s blog Olives and Atichokes will know that this ground has been bought by our Mairie and sold to a developer: there will be a hundred (!) new houses, and this particular patch will be ‘une espace verte’.  They’ve done well so far in creating a green space – by bulldozing the area, eliminating orchids, wild fennel, broom, valerian, and wild sweet peas, and installing gravel and street lights.  I expect the treated wood planters (with non-native species which will be neglected and die, to be replaced with Coke cans and beer bottles) to arrive next. Will the birthwort at the edge of the area survive?  Why do local councils, developers and politicians hate wild green spaces – that is, Nature, – so much?  Can we stop using the words weed and waste?

PS – I’ve just found some more of these growing through cracks in the concrete by the same stream – a more hopeful image of nature overcoming ‘development’ (photo by Chaiselongue).  Aristolochia is also called pipewort, so I’m glad it grows where we put our hosepipe to siphon water down to the garden! I’m going to write a short piece in Occitan about them for the new twice-yearly Occitan news-sheet.  That should give the developers pause for thought.

PPS – I should remind you all that this plant is poisonous: see the full account here.

So this is a song for plants – and people – not recognised and not properly appreciated:  the old Ray Charles song You don’t know me , played by Patricia Barber.

Coming up next: Almodóvar and botany? What?