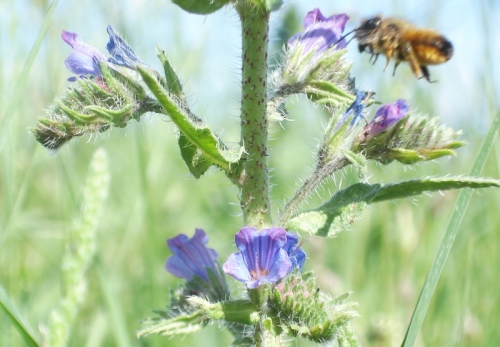 French name: Viperine. Biennial or perennial, found all over France, and indeed most of Europe.

What a great English name! It dates all the way back to the Greek naturalist Dioscorides (40-90 CE) and his book De materia medica, which remained continuously in circulation and use till about 1600 – it wasn’t one of those books like earlier Greek natural philosophy which went out of sight until translated in twelfth-century Moorish Spain.

This plant is thought to be the one Dioscorides called ekhion and recommended for both prevention and cure of snakebite. This seems to have arisen from the shape of the seeds, which resemble snakes’ heads.

Sixteenth-century botanists thought it similar to bugloss (Lycopsis/Anchusa arvensis), and indeed both belong to the same family: Boraginaceae. Bugloss comes from the Greek bouglossos, meaning ox-tongued – most plants in this family have thick, rough, tongue-shaped leaves. A particular feature of this plant and many others in the same family is that the flowers start out pink and change to bright blue – you can see both colours in the picture. It must be a change in pH in the petal, which responds like litmus paper – if you put a blue flower in vinegar it changes back to pink (I’ve just tried).

Coming up soon: Ray Florets – who’s he and what’s he got to do with New Orleans?

And on 15th May a Presidential transfer special with two trips to Hades and one to Athens – none to Holland, strangely.

Now to another herb: if you’re a fan of the jazz of 30’s Harlem, you may know that ‘viper’ was a slang term for a marijuana-smoker, and featured in several cheeky drug-related songs by Cab Calloway, Fats Waller and Stuff Smith, among others.  I’m featuring the violinist Stuff Smith and his You’re a Viper (1938).  ‘Mighty Mezz’ in the song is a reference to the strong Mexican dope sold by the musician Mezz Mezzrow. It was the innocent days before heroin arrived and pretty well every musician smoked a lot of reefers.  Of course, it’s all different now.

Dreamed about a reefer five feet long. Mighty Mezz, but not too strong. You’ll get high, but not for long. Cuz’ you’se a viper.

I’m the king of everything. I’ve got to be high to have that swing. Light a tea and let it be. You’se a viper.

When your throat get dry you know you’re high. Everything is dandy.

Truck on down to the candy store. Bust your konk on a peppermint candy.

Then you know your body’s spent. You don’t care if you don’t pay rent. Sky is high, you high. If you’se a viper.